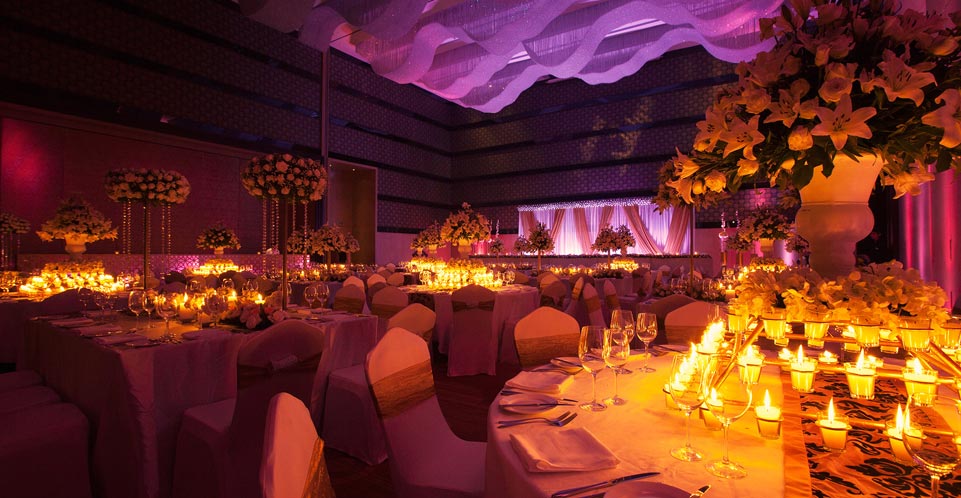 India's 'Silicon Valley' is anything but short of wedding venues. Ranging from 5-Star Hotels to chic and stylish garden venues, the city has a wide gamut of attractions for the wedding couple to choose from. Listed below are some of Bangalore's most prominent wedding attractions

In keeping with its larger than life name, 'The Leela Palace' spread over a sprawling expanse of nine acres in one of Bangalore's most sought after locales, resembles a palace more than a hotel. Lush gardens, gurgling waterfalls and architecture that is unapologetically grand in its bearing all have the collective effect of making one feel that they have been transported into another world altogether. Its proximity to some of Bangalore's largest malls and plush restaurants only serves to enhance its brand value.

Crystal chandeliers, hanging from a 15-feet high ceiling greet you into 'The Grand Ballroom', the largest banquet hall in the establishment, which can accommodate as many as 650 guests.

'The Royal Ballroom', which can house 200 guests can be used either in isolation or can be clubbed along with the 'The Grand Ballroom' in the eventuality of your guest list running into a thousand invitees. With 357 rooms, each of which are lavish, spacious and lacking in literally nothing, taking care of the boarding of your guests, it is little wonder then that 'The Leela palace' today commands the top dollar for wedding events, albeit for those who can afford it.

In terms of location, the JW Mariott Hotel takes second place to none. Ensconced, almost languidly on Vittal Mallya Road, the establishment is contiguous to UB City on one side while the seemingly endless green carpet of Cubbon Park rests on the other. The Hotel, which opened to business in Bangalore in 2013 has, all in the span of two years, become one of the city's most reputed hotels, not to mention most opulent as well.

With a wide array of indoor and outdoor venues to choose from and spread across a mind-boggling 10441 square foot of Bangalore's prime real estate property, the customer is likely to be left spoilt for choice when it comes to deciding on a venue. With a capacity to accommodate nearly a thousand guests, the JW Mariott Hotel is ideal for large wedding receptions.

Urbane, both in its looks and outlook, the JW Mariott Hotel exudes modernity. A welcoming lobby, with an unbelievably tall ceiling, stylishly designed rooms, etc., all add to a conducive atmosphere for intimate functions such as wedding. A wide assortment of cuisines and restaurants to choose from within the Hotel ensure that there is plenty and more to tantalise your tastebuds.

Keep your date with history at the Taj West End. This 125-year old structure, which continues to preserve in its structure and many traditions, Bangalore's past is among the oldest business establishments in the city. A stone's throw away from Bangalore's administrative hub, the Taj West End, with its bewitching gardens, a serene pool and a seemingly untamed wilderness is a throwback to simpler times.

Among some of the places that one can choose from to have a gathering are the 'Prince of Wales' lawn and the expanse by the poolside. The hotel is well equipped to house at least 500 guests. It is the wedding venue that all photographers dream of.

With 91 rooms and 26 suites, each of them representing a perfect blend of tradition and modern luxury, with each opening into a gratifying view of the gardens.

In a world that has come to be increasingly characterised by its indifference to nature, the ITC Gardenia, situated almost equidistantly from Cubbon Park and Canteerava Stadium, comes across a refreshing gust of change. It is hard to find a more modern establishment, which functions with near perfect harmony with nature. The ITC Gardenia is eco-friendly, without compromising on quality and the luxury quotient. An almost pervasive serenity provides the perfect foil to all the modern civic utilities that one needs. Add to this already enticing mix, the establishment's central location and you realise that you need look no further for an ideal wedding venue.

The ITC Gardenia is as renowned for its chefs and the wide assortment of savouries and delicacies that it has to offer as its luxury. Its 292 rooms, as many as nine banquet halls to choose from, which also includes the city's largest hall without pillars, all add to making this one of the most attractive wedding destinations in Bangalore.